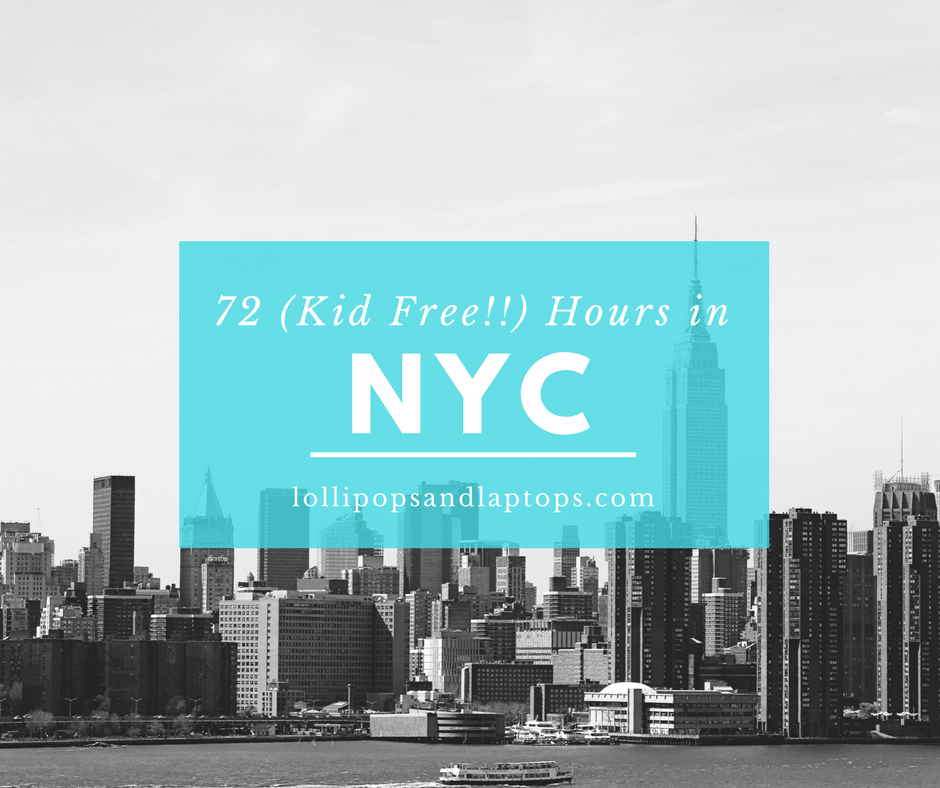 I am never away from my kids. I mean, you know, except for 40-50 hours a week while I’m at work. But like, never away away. In the 16 months my son has been alive, I have literally not been away one night from him. Not one night. And my daughter just turned four. In total, I have been away from her four nights. But only one night at a time. Combine these with the fact that my husband regularly travels for work plus some travel for pleasure, and I have been totally overdue for a trip away.

It took A. LOT. for me to ask my parents to watch the kids for us while we went on vacation. My parents are helpful, but they’re busy. They have lives. My kids are little. They need a lot of supervision and attention. And to be honest, that is kind of a pain in the ass. Not only is it hard for me to ask for help in the first place, but it was torture for me to ask for someone to parent for four whole days. But I am so glad I asked. We needed this trip so badly.

To make it easiest on my parents, we traveled Wednesday through Saturday so the kids had school most days we were gone. We dropped them off at school Wednesday morning and headed to the airport. Although it was a bummer to take a whole day off of work just for travel, it made it a little easier for my parents, and therefore a little less stressful for me.

I haven’t been on a flight without kids in years. Just having the ability to sit in my seat without a baby in my lap or a toddler climbing all over me was heaven. But being able to read, watch a movie and have an adult discussion with my husband was pure bliss. And not having to check in luggage was a dream. I could have flown straight home after that and still would have felt rejuvenated!

By the time we got to our apartment around 11:00 pm, (we stayed at my in-laws’ place for free while they were traveling,) we were tired and hungry. We walked over to The Jeffrey and had a delicious Reuben sandwich and a couple of really great beers. Although we were exhausted, it was nice to feel like the day of travel wasn’t a total waste. 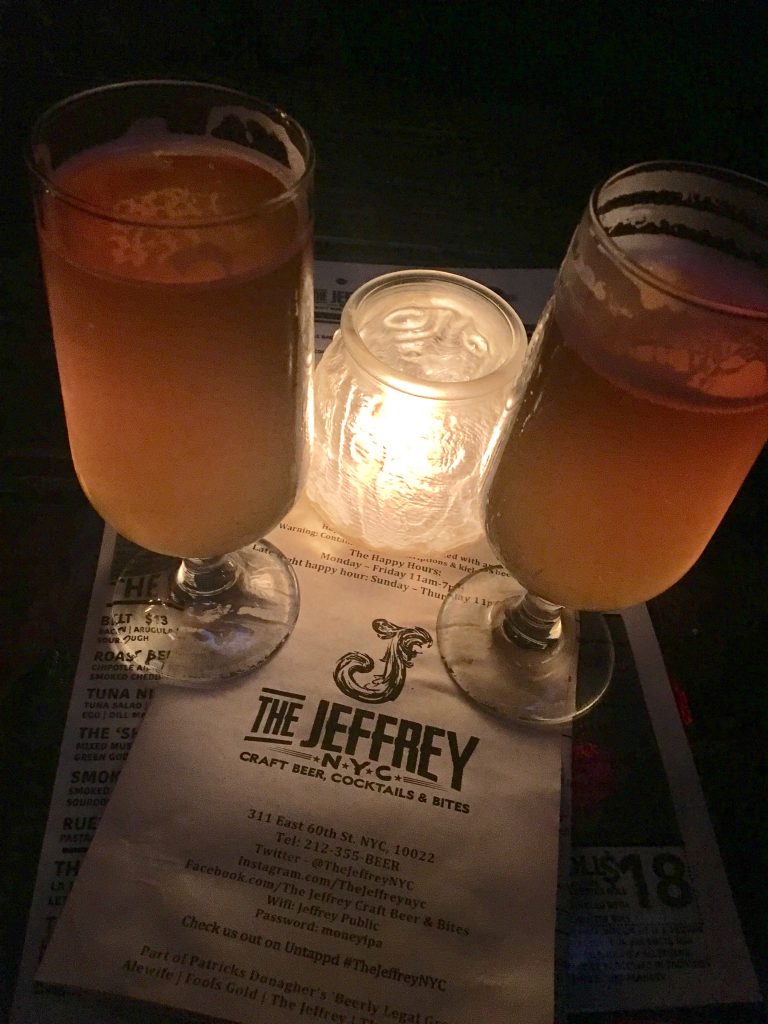 Beer and a Reuben for our first meal.

Although it could have been nice to sleep in, we wanted to make the most of our short trip. We had previously planned to meet my old college roommate, a radio show host, so we could check out the recording studio and then have brunch. It was so nice to reconnect after so many years, and it was a really neat experience to see the studio and the radio show in action. Although she promised not to put me on the radio, at the very end she told us to give a shout out and her co-host asked for details of her crazy college days, but I told them I’d keep it between us.

We walked to Tribeca and had a fun little brunch at Bubby’s. My husband had a Bloody Mary and eggs Benedict. I was still a little full from my morning muffin so I opted for Matzo ball soup and a mimosa flight. The mimosas were very interesting. There was a classic with OJ, a grapefruit, a pineapple and cilantro, and a spicy jalapeño mimosa. 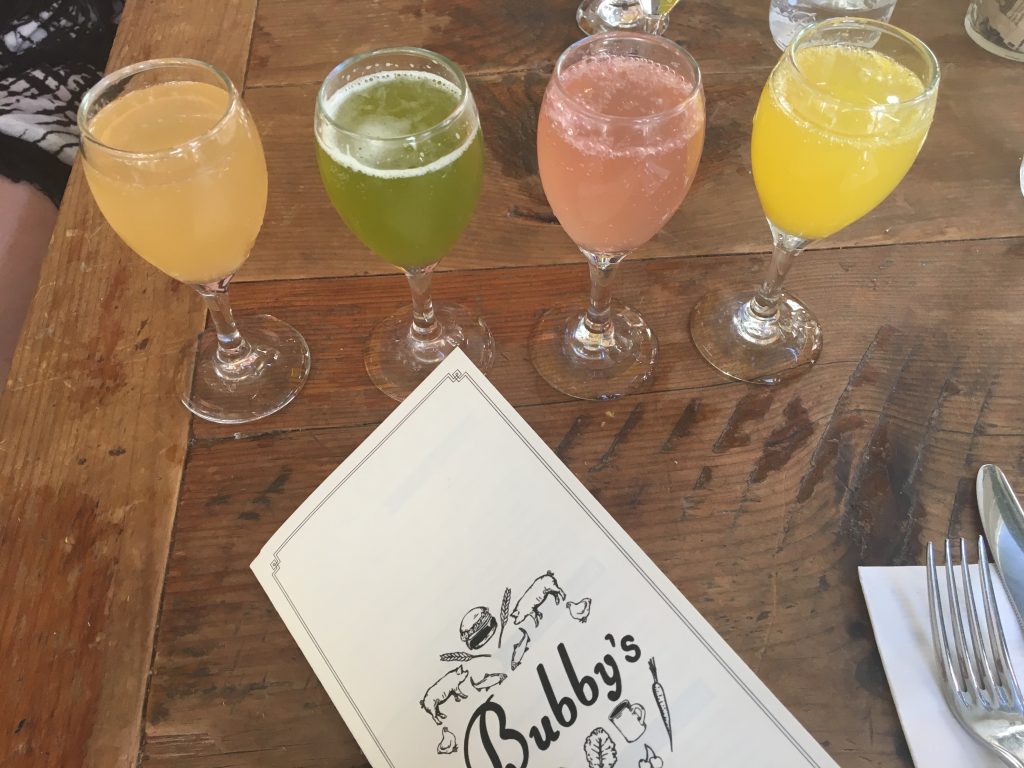 Mimosa flight. Can brunch get any better?

After brunch, we walked over to the Financial District and stopped to check out the 9/11 memorial. I hadn’t been over to this area since June 2002, and at that time it looked like a construction site and had makeshift memorials. They really did a beautiful job honoring the site and the victims. 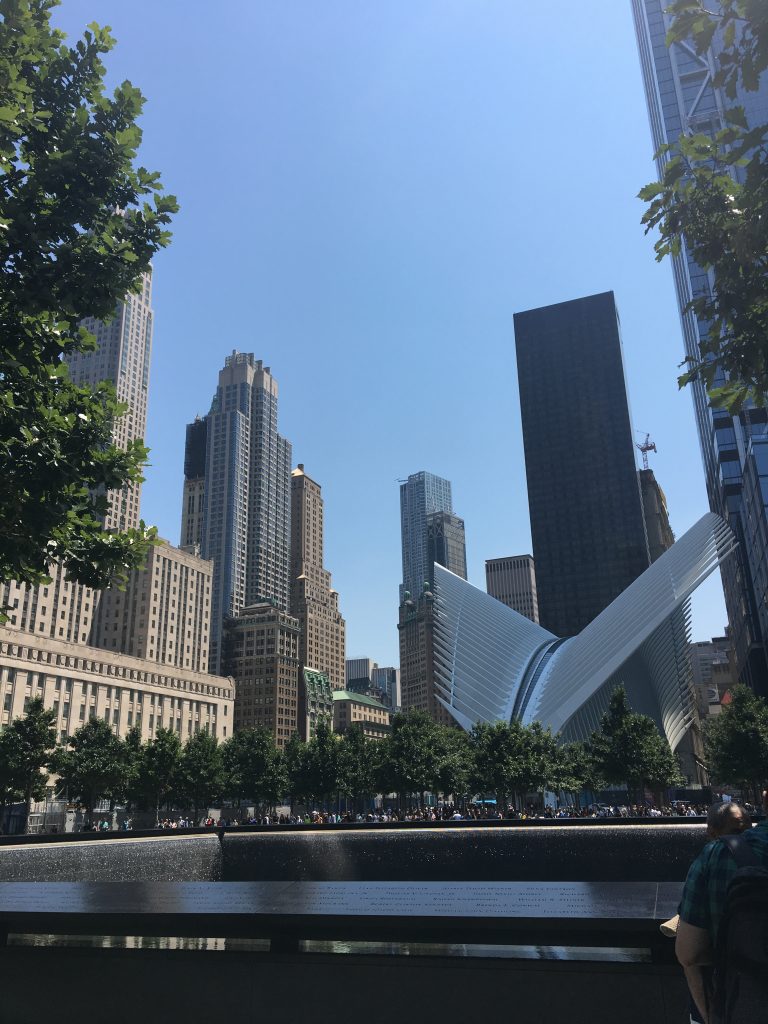 Cityscape overlooking one of the two memorial fountains.

We met up with my friend’s husband and stepson at Pier A to have some drinks and catch up. The weather could not have been more perfect. It was sunny and warm, no clouds, and not humid. We had a Brooklyn Brewery beer made exclusively for the restaurant and a giant soft pretzel with a beer mustard sauce. It made for a great afternoon snack. 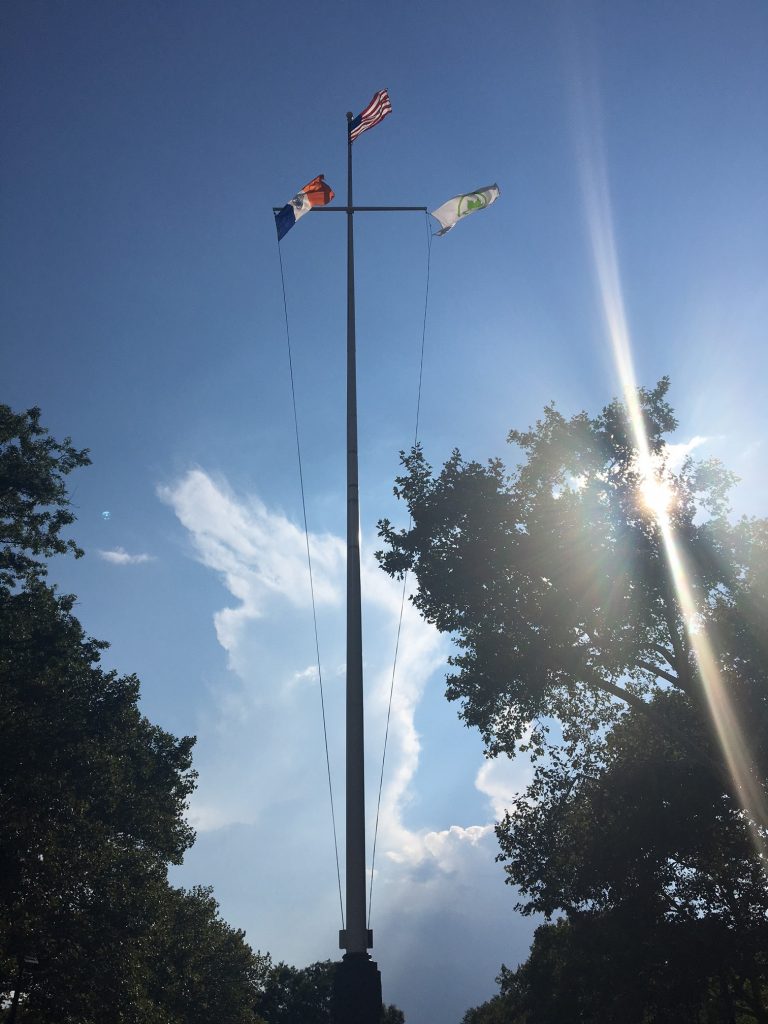 This trip was sort of a birthday trip for my husband, since it overlapped his big day, and he wanted to check out a brewery in Brooklyn anyway, so we braved commuter traffic on the subway late Thursday afternoon to grab a beer at Other Half Brewing. It was the first time in a long time that I wasn’t pregnant, nursing, or designated driving, so it was nice to be able to have a few beers and enjoy our time together. The trek took almost three hours round-trip, but the delicious beer on tap and bottles we took home made it worth it. 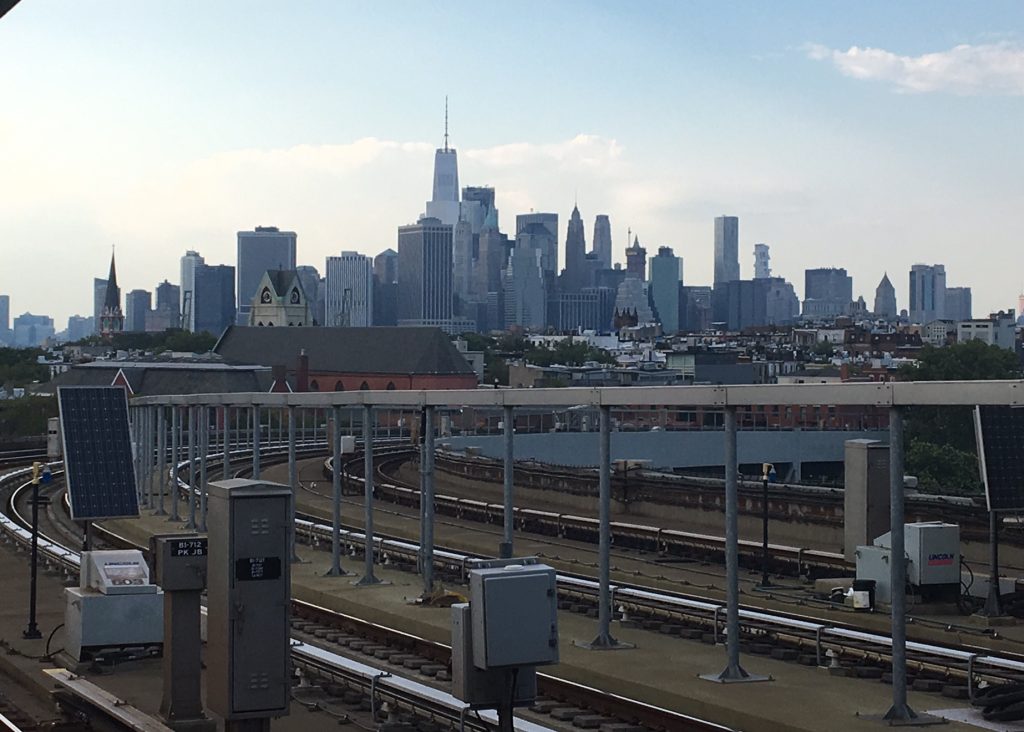 Snagged a quick city shot when we hopped off the subway in Brooklyn.

We dropped the beer off at the apartment, got ready, and met a friend in the East Village for dinner and drinks at Ducks Eatery. We sat on the patio which was nice because the music was too loud inside to enjoy a conversation when catching up with an old friend. The food was so-so. We shared a few plates tapas-style. The chicken wings were great and had a delicious spicy sauce on them. The side of coconut rice was also really good. But the fried artichoke was bland and the ribs were not very flavorful. The drinks were really good and the company was great, so all in all it was a well-spent evening, but we won’t be eating there again.

We opted to walk the full 30ish blocks home (a little over two miles) to enjoy the gorgeous night and get to walk the neighborhood back into midtown. We stopped for an ice cream sandwich at Insomnia Cookies, and although we weren’t really hungry at all, they were totally worth it. 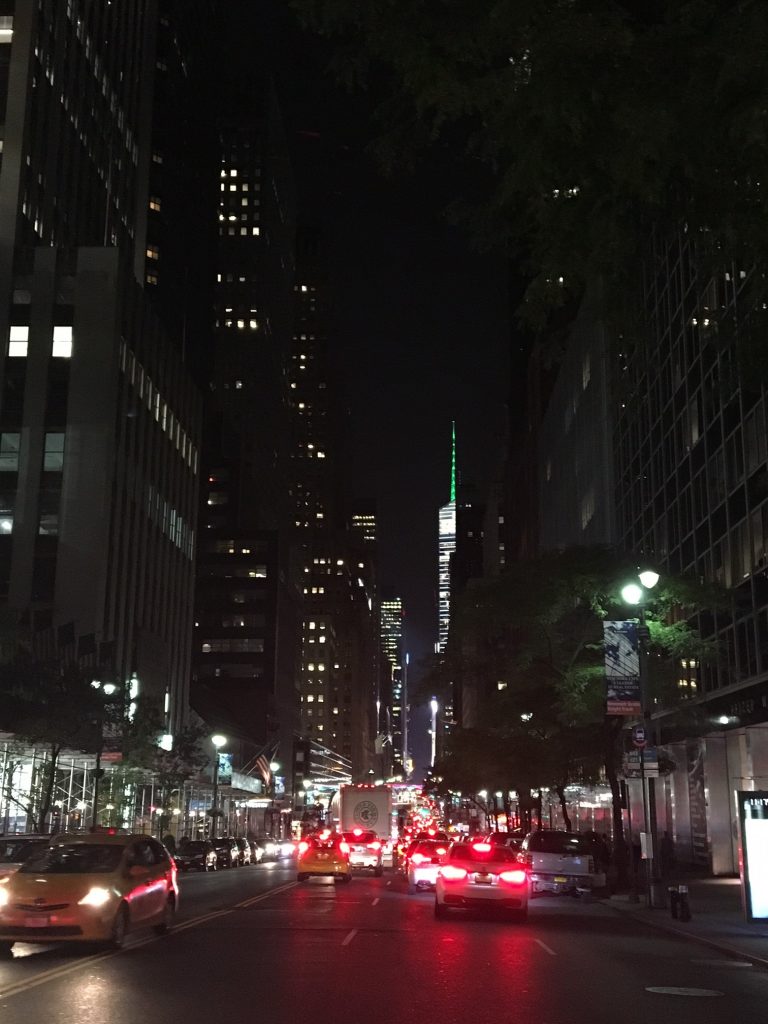 Can’t get enough of the city views.

Although we have both been to New York quite a few times, my husband has done almost no touristy things. I’ve seen a few attractions, like Ellis Island, the Statue of Liberty, the Met, and I’ve taken a boat tour. We mostly love exploring different neighborhoods and seeing what we can stumble upon.

We were meeting a friend who works in Union Square, so we walked the area until we met up. We planned to try Tim Ho Wan USA, a Michelin star dim sum, but the 30-minute wait didn’t work well with my friend’s lunch break, so we walked a few blocks down to Ippudo, a ramen place another friend recommended. As a nod to the dim sum we couldn’t get that afternoon, we got a pork bun appetizer. They were absolutely amazing. My friend and I went with the classic ramen dish and my husband chose a cold ramen special. The consensus was the classic ramen was the better dish, but all the food was awesome. The best part was the abnormally friendly staff. From the restaurant-wide greeting upon entry to multiple servers refilling waters and checking on our meal, it was by far the friendliest meal we had on our trip. 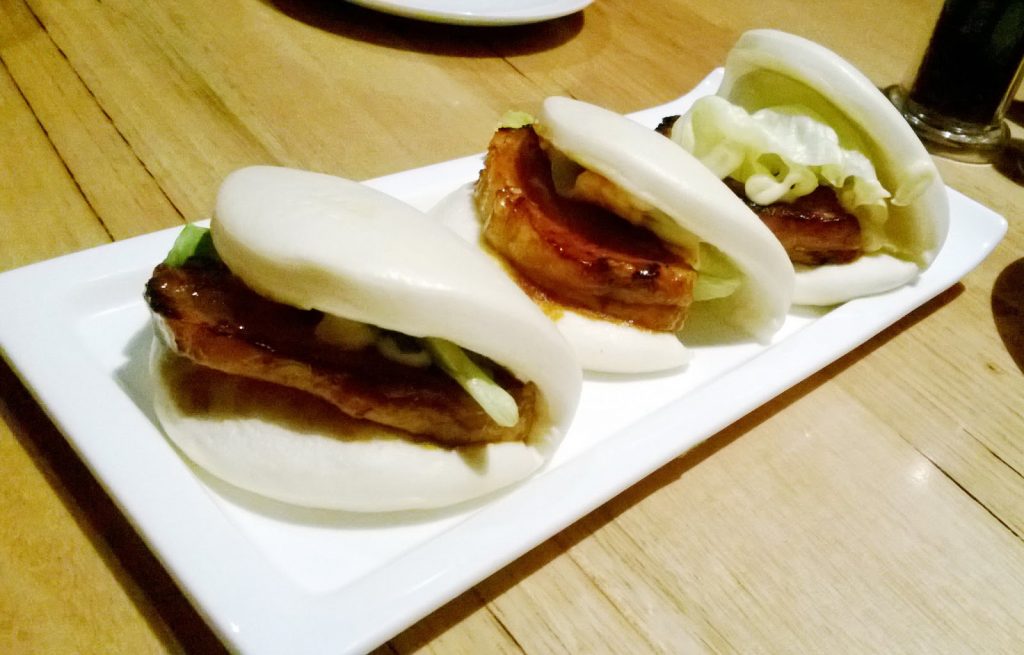 These pork buns were so good!

After lunch we walked our friend back to work and decided to take a walk to SoHo. We mostly went to pick up macarons from Laduree for me, but it was nice to walk the neighborhood. I love how unique the people are in each neighborhood in the city. It was a short-lived stroll because we had to go get ready for our evening plans. 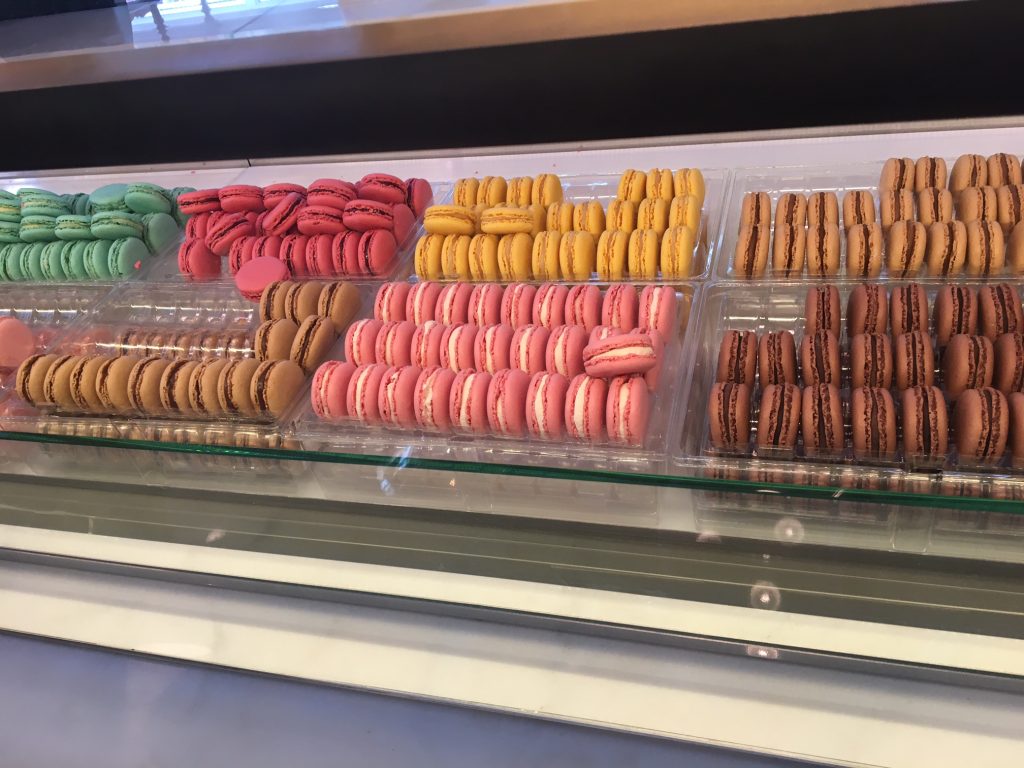 A rainbow of deliciousness.

The catalyst for our trip was because one of my favorite books, George Orwell’s 1984, is currently running on Broadway. We opted for the earlier show so that we could have a leisurely dinner after, which was a great move. The show was intense. It has had a lot of press discussing its overly intense production. But this show did not disappoint. It was incredibly well-acted, beautifully produced, and it does exactly what it sets out to do–to make the audience feel as uncomfortable as the protagonist. 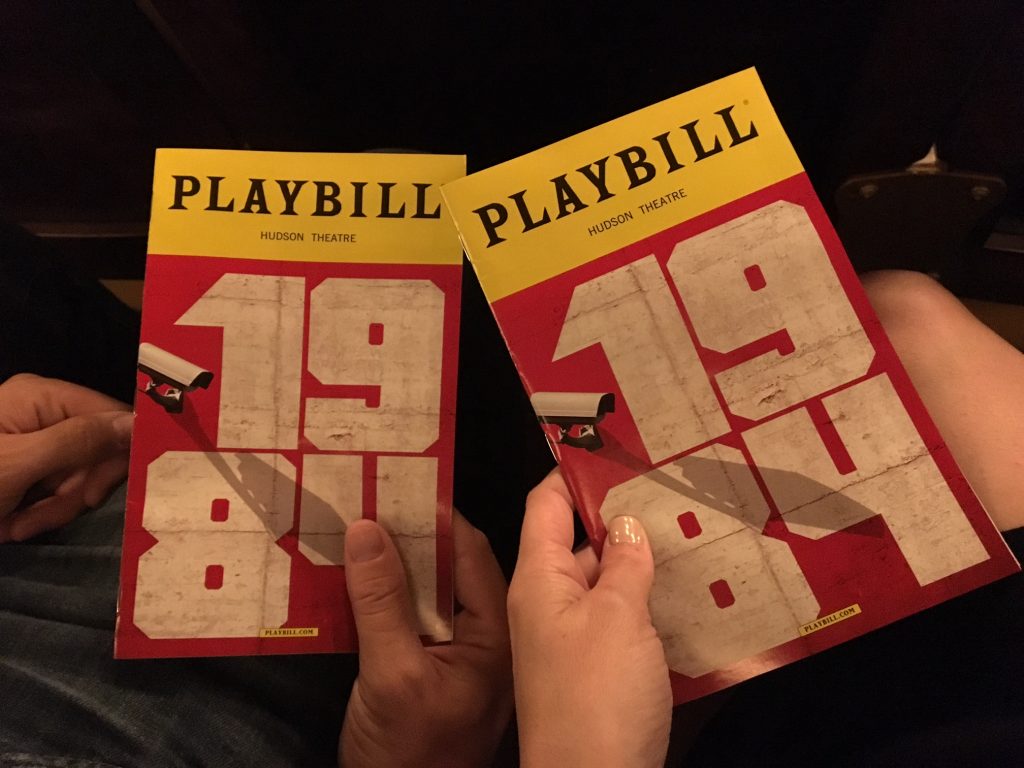 Just as good as we hoped it would be.

At the recommendation of several local friends, we opted to make reservations at Maialino, a fine-dining Italian restaurant overlooking Gramercy Park. We were only able to get reservations at the wine bar since we waited a little too long to call. Since we got out from the show earlier than we anticipated, we opted to walk to dinner. We planned to sit for a drink at the bar, but as soon as the bartender handed over a beer to my husband, they were ready to seat us. 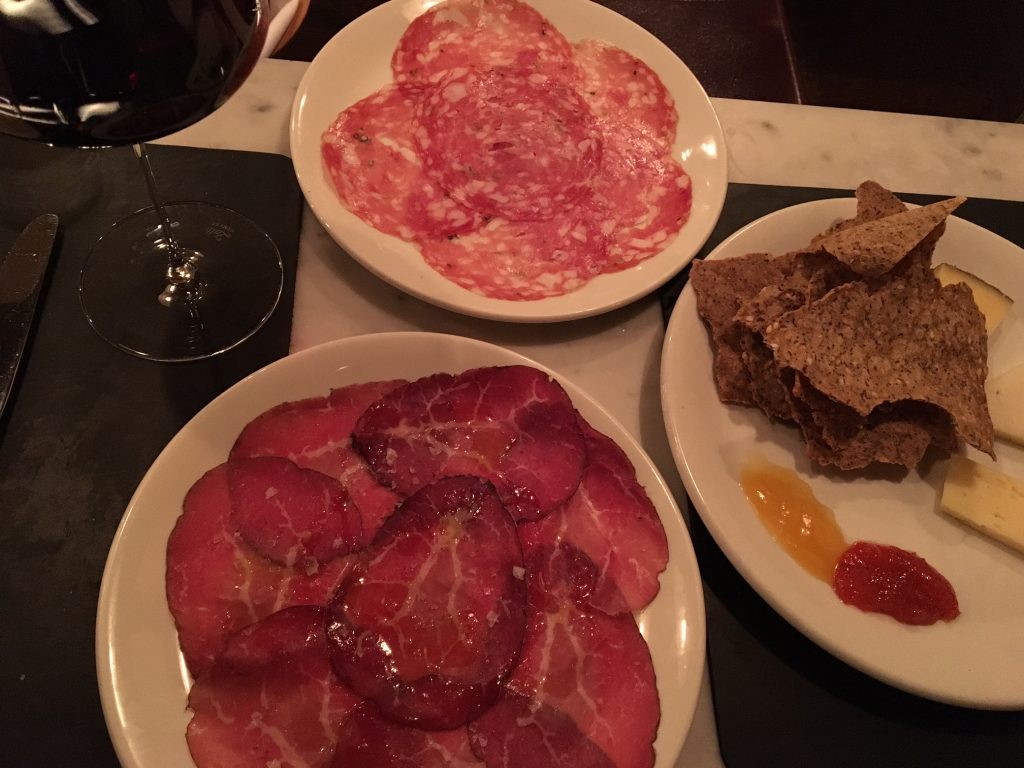 Give me all the meats.

This was the absolute best meal we had on our trip. We started with a charcuterie plate and let our server recommend which meats and cheeses to choose. Since we wanted to try a few things on the menu, but neither of us is capable of eating a pasta dish as a first course in traditional Italian form, we chose a pork sausage rigatoni to share as a first course and had a roasted pig with rosemary potatoes as our second course. 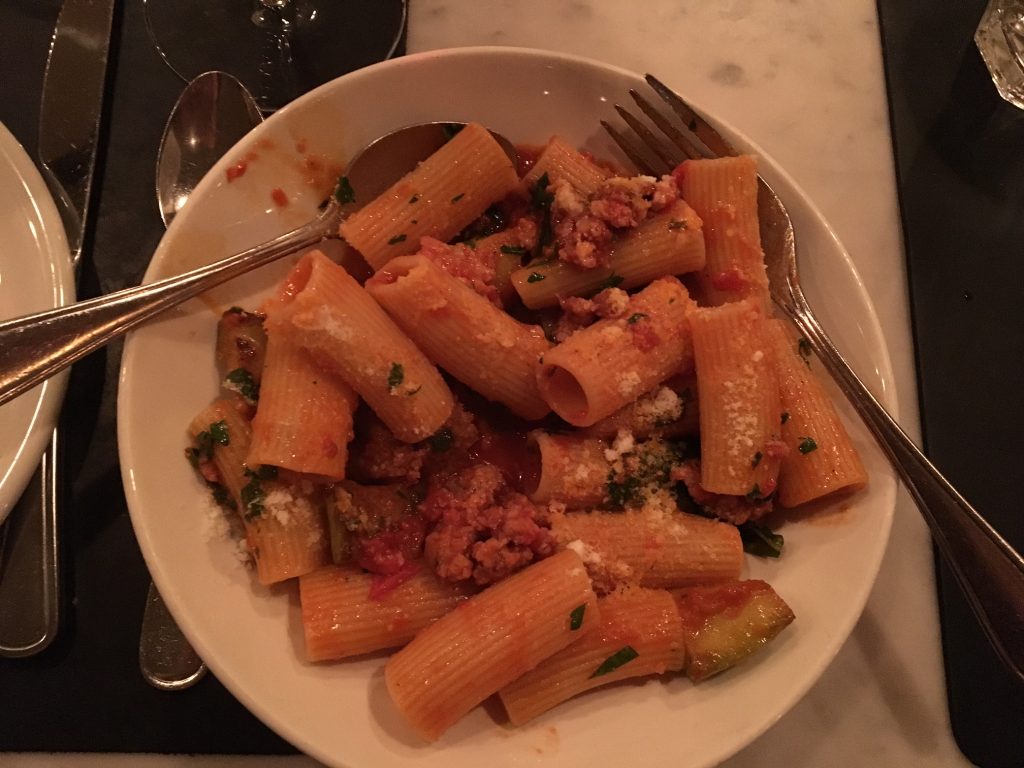 First course. We dove into the food so fast I forgot to take a picture of the second course.

At the suggestion of our server, we added a side of zucchini. It is intentionally served chilled, and although it was flavorful, it didn’t go well with our second course. I had a glass of Syrah and my husband had a Chianti. Our server/sommelier chose the wine. The food was impeccably cooked and so delicious. We topped of the evening with a chocolate cake with salted date caramel and whipped crème fraiche. Much to my husband’s embarrassment, I asked them to put a candle in it. It was, after all, his birthday. We paired the dessert with a server’s-choice port for her and a whiskey for him. 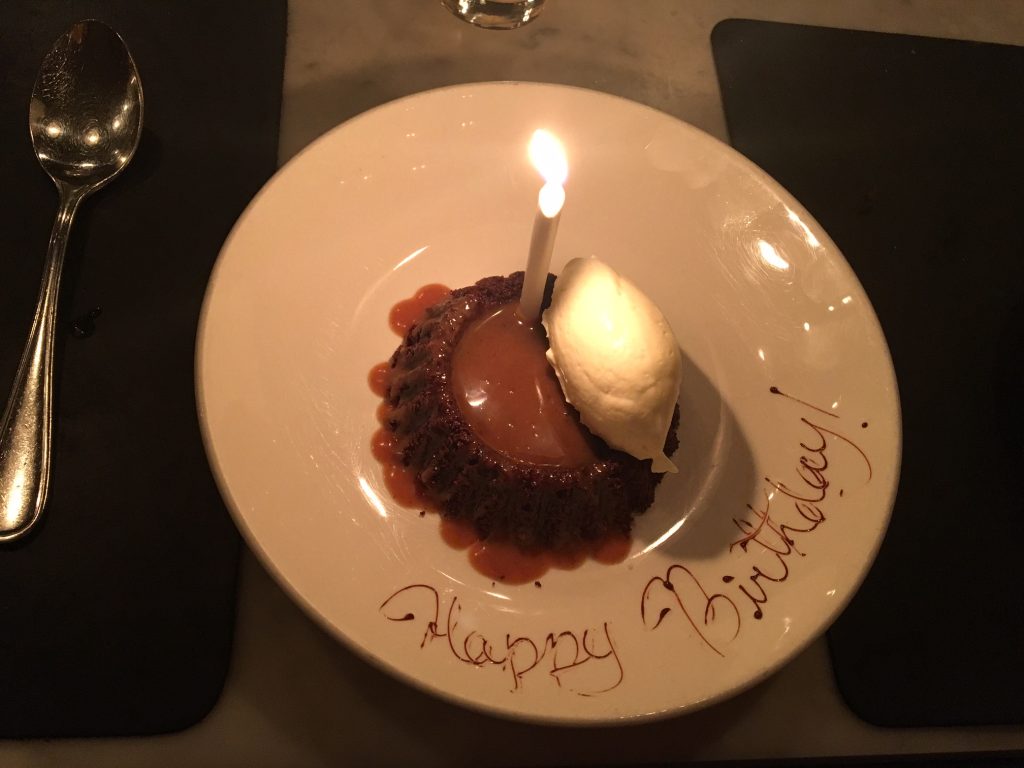 After dinner we were so full and exhausted, but we walked the 20 blocks home. We opted not to stop for a planned nightcap at Draught 55 because of the long days with minimal sleep. 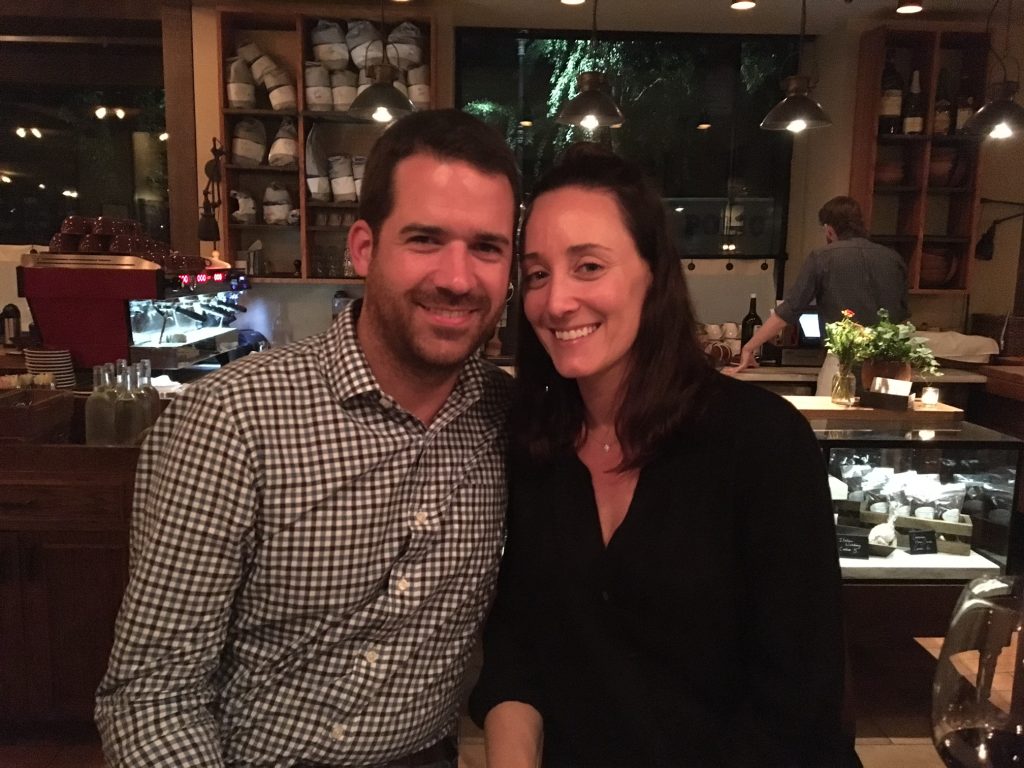 Our only day of rain was the morning we were leaving, and although it crashed our plans of walking to Ess-a-Bagel, another local’s recommendation, it gave us an excuse to sleep in a little. We grabbed a bagel at a local, non-hipster bagel shop and hopped in a cab to the airport. My biggest regret was not shelling out (quite a bit of) money for a musical I’m dying to see, because now I’m trying to convince my husband to go back out for our anniversary in September. Although the trip was so short, it was priceless to spend a little time just as husband and wife. And maybe the best part was that for the first time in four years, I actually missed my kids, which made our homecoming all the more happy.